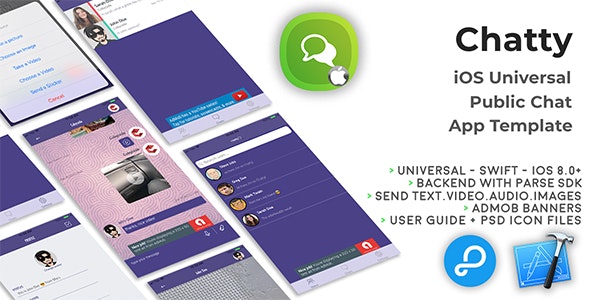 
Chatty is a Universal App Template for public chats anywhere you are.
Users can send text, audio, video, and image (including stickers) messages, favorite chat messages into the Settings screen, update their profiles and set a chat wallpaper.
You can block/unblock users by swiping a user’s cell left and tap the Block/Unblock button.


Important Disclaimer: We’ve recently found out that some developers have bought our app templates, reskinned them just a bit and put them on sale on other source code markets similar to CodeCanyon, saying that they developed and own such source codes.
That is a serious copyright infringement, developers who buy our templates are allowed to reskin and sell them as apps on the App Store (accordingly to the License type they’ve purchased a template for) but are not allowed to put our original source codes for sale on source code markets, including CodeCanyon. We will report developers who made copyright infringements to the competent authorities. Thanks.