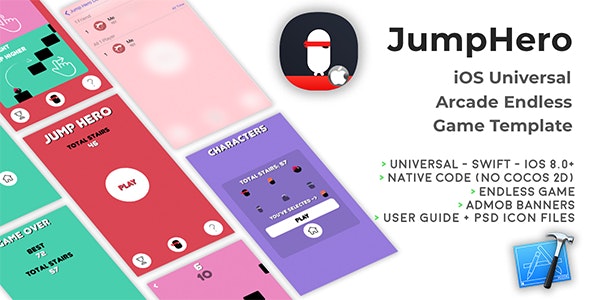 
Jump Hero is a funny game template where you have to jump as many stairs as you can with your character before the timer ends. You earn 4 additional seconds every 20 stairs you climb, it goes by gestures: one tap to jump 1 stair, swipe right to jump 2 stairs. Be careful not to fall down, but be quick as well!
Once you collect many stairs, you can unlock new characters and play with them.

Check this video out to see how to setup a Game Center Leaderboard for your app’s page on iTunes Connect: https://www.youtube.com/watch?v=HG2DyUzi0g4


Important Disclaimer: We’e recently found out that some developers have bought our app templates, reskinned them just a bit and put them on sale on other source code markets similar to CodeCanyon, saying that they developed and own such source codes.
That is a serious copyright infringement, developers who buy our templates are allowed to reskin and sell them as apps on the AppStore (accordingly to the License type they’ve purchased a template for), but are not allowed to put our original source codes for sale on source code markets, including CodeCanyon. We will report developers who made copyright infringements to the competent authorities. Thanks.