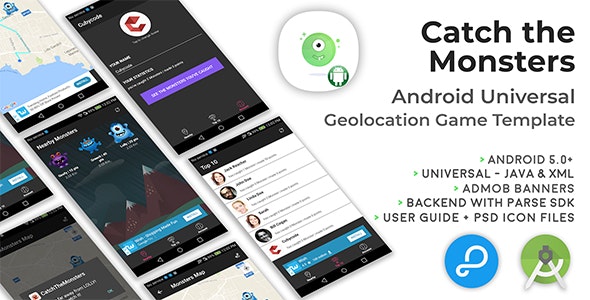 
iOS and Android version can share the same database on back4app


You can still check the video preview of this app by clicking on the image below:


Catch The Monsters is a Universal Geolocation Game Template where you have to find monsters around your area, and if the app finds them you must get closer to them (at least 50 meters) and catch them to earn points and climb the Top 10 Leaderboard, or just share your statistics on social networks, Mail and SMS.
As the Admin of the app, you have to insert as many Monsters as you want in any location of the world into your Parse Dashboard, so users who access the app can search for Monsters around their areas, and if they are there, User can tap a Monster and get its position on the Map. You can easily insert Monsters’ coordinates, name, and points via the Parse Dashboard, everything is explained in the User Guide included in the package.
The embedded Map gives you the possibility to trace a route to get from your current position to the Monster’s one.

TIP FOR TESTING AND PUBLISHING:You should create some Monster around your current area and use a real device to test this app, so you can walk or drive towards those monsters and catch them.
Please also note that once you catch a Monster, it gets removed from the Monsters class in your Parse Dashboard, otherwise, other Users may catch the same Monsters you’ve caught in a specific area, so you should daily check your Dashboard to add new Monsters and keep the game alive.
It’s a big challenge that may amaze your users anywhere they are, or just in a specific Country, because you may place Monsters in a chosen Country and publish your own version of this app to that Country’s App Store only, then buy another License on this page, localize Monsters in another Country and publish a new app, and so on.
Another great thing you (Admin) can do is to use Parse Push web console to send Push Notifications to all registered devices. For instance, let’s pretend you’ve added new Monsters in the New York area, you can send notifications to your users like “New Monsters got in New York City last night, catch them all!”, and keep your users wanting to play the game!
You will also have to get a Google Map API key to make the map work in your app.


How do I rename the app’s package name?

Read this tutorial to learn how to rename a package name: https://hubpages.com/technology/Android-How-to-rename-an-app-package


Should I use the latest version of Android Studio to edit this template?


How do I remove AdMob banner ads?