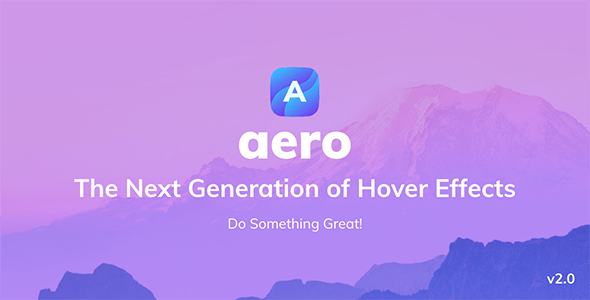 Aero | A Way to Show Emotion

Images alone are a very powerful way of communicating information. Animations are a very strong tool when telling a story. However, a combination of both is nothing more than a powerful way to show emotion. Aero is a collection of image hover effects that are very well crafted so that when you build your website you can touch people’s hearts.

Want to Learn a Bit More About Some of Aero’s Features?

Modern technologies are very easy to use and they can help you very much when building a website and maintaining it. This is why Aero is built with such technologies as pug, sass, and typescript.

But, what if you want to use plain html, css and javascript? Aero is shipped with a modern gulp workflow so that you can focus on what matters the most to you. You have the option to compile it both for development and production depending on your needs. Also, it might be nice to know that this workflow supports file watching, browser synchronisation, auto-rebuild, pug compilation, sass compilation, typescript compilation, image optimization, css injection, cache busting, etc.

Aero architecture is simple but very effective. It allows you to customize each image effect either from the sass configuration file or live directly in the browser through css variables.

Image Grid Support Right Out of The Box

Many times when you use images you want to create an image grid, for example, to create a portfolio. You will be happy to hear that Aero comes with a powerful fully customizable image grid out of the box.

A lot of effort has been put into creating a very easy to use documentation. It can be opened directly in the browser through the npm scrips. However, if you like you can build the documentation to static files so that you can have access to it anytime and anywhere without worrying about dependencies or other stuff that could stay in your way.

Aero’s HTML5 generated code meets the best SEO practices. Your images will be easily viewed by the search engines so you don’t have to worry about it too.

If you have a problem you can write an email anytime and describe your problem. Support requests are being processed on business days from 8:00 to 17:00 (GMT+3) as soon as possible.

4.75 stars
4.75 average based on 8 ratings. (more information)
© All Rights Reserved gleesik
Contact the Envato Market Help Team
Quick Links Explore popular categories
by
by
by
by
by
by