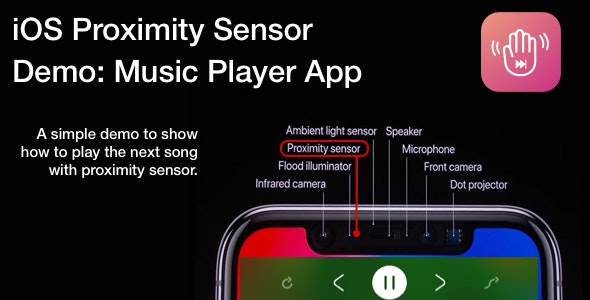 The project is based on an open source player to show an example how proximity sensors can switch the song.

“iOS Proximity Sensor – Player App Demo” is very easy to use. Swipe hand front of iPhone, then the song goes to next (using “proximity sensor” located top of iPhone).

Apple iOS Proximity Sensor detects only the gesture, not only swiping to the left or the right, because the action will be the same. You can close with a finger the proximity sensor and it will work the same.

The Proximity Events API allows mobile applications to get the access to the data from the device’s proximity sensors, detecting whether there is a physical object near the device. In this demo we show how to move from song to song in ascending ordering and at the finish to restart again the flow. Once you bought this project you have big plans with those sensors because they are amazing, you can reuse our manager class in your project and create your own ideas.

Apple’s Proximity Sensors is the main feature on our project. In the patent, Apple describes devices using proximity sensors to detect your hands hovering or waving above the device. The proximity sensors would be similar to those that detect your face and turn off the screen while you’re holding up an iPhone to your face for a phone call.

Using proximity sensors would be yet another way to interact with your Apple devices. The company recently introduced 3D Touch displays on the iPhone 6s and Force Touch trackpads for its laptops, which bring up useful shortcuts and features

when you apply more pressure than a regular tap.

Where you can use the Proximity Sensors? Anywhere!

For example: if you want to add some actions when the Proximity Sensors detecting a motion, you can do everything!