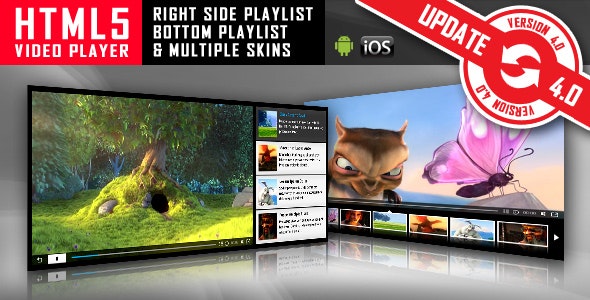 contains 3 video players: right-side playlist, bottom playlist and simple versions. You have the option to select one of the 5 custom made skins which will enrich the design of your page
NEED THE WORDPRESS PLUGIN FOR THIS PRODUCT? YOU CAN DOWNLOAD IT FROM HERE: http://codecanyon.net/item/html5-video-player-wordpress-plugin/1613464

It plays .MP4 video files and .WEBM (on browsers which don’t have MP4 support)

MULTIPLE SKINS INCLUDED
You can choose from 5 skins for each player. To choose the skin just set “skin” parameter.
Ex: skin: universalBlack

MULTIPLE INSTANCES
You can insert the player multiple times in the same page with the same skin or using a different skin.

FULLSCREEN
It supports full screen, having all the controllers usable in full screen mode, including playlist.

AUTOHIDE FOR CONTROLLERS
The controllers will auto hide on mouse out, showing the entire movie

PREVIEW IMAGE
A preview image can be defined for each movie

PLAYLIST IMAGE
A playlist image can be defined for each movie

VOLUME CONTROL
You have a complete sound control. You can also set the initial volume

DESCRIPTION FOR VIDEO
You can set a Title and Description for the video. Supports HTML & CSS formated text.

LIGHTWEIGHT
The JS has around 38KB

EASY IMPLEMENTATION
The setup takes up to 60s.