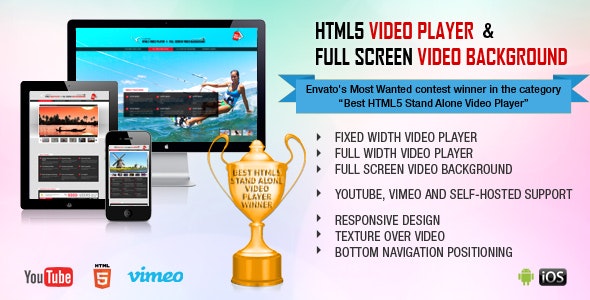 
IF YOU NEED THE WORDPRESS PLUGIN FOR THIS PRODUCT, YOU CAN DOWNLOAD IT FROM HERE : http://codecanyon.net/item/video-player-fullscreen-video-bgd-wp-plugin/9323381

It plays YouTube, Vimeo and Self-Hosted video files. For YouTube & Vimeo all you need to use is the video ID

Over 30 js options from where you can customize your player, including: autoplay, loop, colors, dimensions, show/hide video controllers, randomize videos…