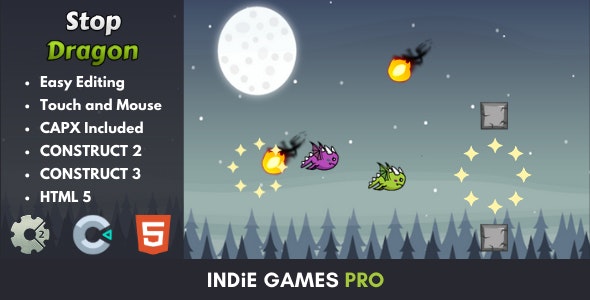 Stop Dragon is a simple adventure game, where you use the blocks to defeat as many dragons as possible until one of them passes through the blocks.

This is an endless game, where the player can continue forever as long as a dragon does not pass through the blocks.


There are dragons of various colors and each has a different pattern of movement.

The difficulty of the game increases as you destroy the dragons. More and more dragons will appear and your speed will increase.

Bonus of the game

There are two bonuses in the game.

Second bonus:Second bonus: There is the “dragon flash”, a dragon very fast and that if he passes through the blocks, you will not lose. But if you manage to destroy it, this dragon gives you more points than the others.

Made in Construct 2, with the inclusion of 1 plugin and 2 behaviors. All of them already included in the package and with explanation in the documentation of how to install.

lunarray.litetween: behavior that moves the object to a position that you determine.
Great for making gameover screens and level selection!

rex_moveto: behavior where you give the object a coordinate and it goes to the coordinate you passed.
Very used to make the behavior of the cameras, as it is used in the game MegaMan and MegaMan X.

Language in which the game codes are commented


If you liked the game, don’t forget to rate it here!