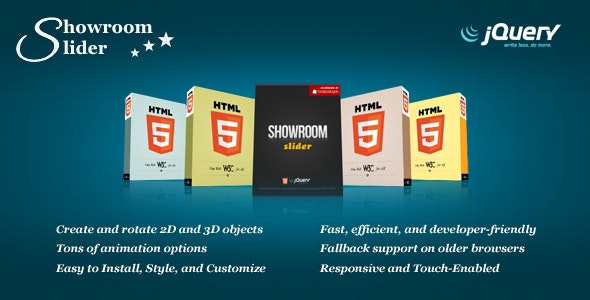 Showroom Slider is a powerful jQuery plugin that allows you to create sliders containing plane and box elements with tons of animation options to choose from. It uses a syntax similar to having inline CSS style on elements to describe every element’s properties and behavior.

Plane elements are two dimensional objects (with width and height) such as text box, images, etc. but can be rotated at angles allowing the users view them from different perspectives with 3D effects.

Box elements are 3D objects (with width, height, and depth) having 6 sides. Like plane elements, boxes can be rotated at angles allowing the users to view them from different perspective.

You can choose from 2 animations types – standard and dynamic. Standard animations have fixed properties and behavior. Dynamic animations are rotating animations that also allow you to define position of origin.

Installation can be as simple as including 3 JS files and then writing the markup. No need for any JavaScript function call. Customizations can be done within every element using their custom attributes and a syntax similar to inline CSS styling.

Default properties can be modified easily within one JavaScript function call. You might want to do this in some cases to save coding time and file sizes for large projects. An API (Application User Interface) can also be used by programmers to integrate their own script into the system.

The package comes with a very detailed documentation and sample files that has lots of comments in the code describing every aspect of the slider. These samples and documentation can also be viewed online.

For questions not covered in the documentation, you may post them in the comments section or contact me through my CodeCanyon profile.