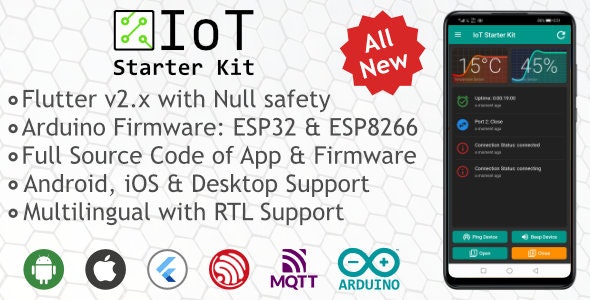 Flutter ESP8266 IoT Starter Kit is a starter project for freelancers, indie developers, hobbyists and professionals. This project includes source code for a simple Flutter application which can target Android, iOS as well as other platforms which are supported by Flutter, and a robust C++ based firmware for Arduino/ESP8266/ESP32 devices.

The aim of this starter kit is to enable the developers to quickly launch their IoT project with custom branded apps for themselves or their customers. The codebase for the app and firmware is boilerplate to get you started quickly, as you can add more functionality to the main app and the device without having to worry about core features like App Settings, Multilingual Support, light and dark themes, and MQTT Communication.

Same is true for the ESP firmware, the firmware is a time-tested codebase, which we have used in our own commercial-grade projects for years, and this can be used as a base project for adding functionality without tangling yourself in features like Easy Wi-Fi Onboarding, Device Settings, Retry-to-Connect logic as well as MQTT Communications with app.

The app and the firmware by default use a public MQTT broker (as a demo) without any authentication to send commands to the device and receive command responses and data. The MQTT broker settings and credentials can easily be updated in the app as well as the ESP device without having to compile the app or the firmware.

The Screens Included with apps are:

We have included a separate version of firmware optimized for ESP32 based boards in the folder “ESP32-IoT-Starter-Kit-Firmware”. Please check the pin configurations in the ESP32 firmware in separate diagram and source code when designing your ESP32 based projects.

As per Envato rules, you must purchase this app under EXTENDED LICENCE in either one of the following case: