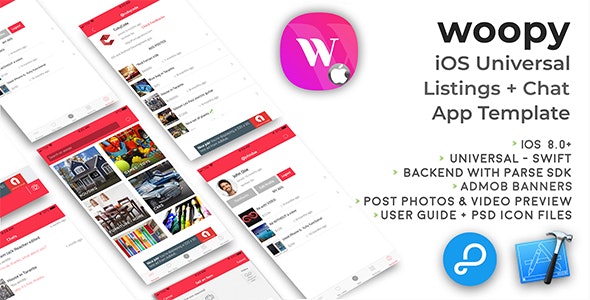 
woopy is a Universal App template where you can browse and post listings on the go, new or used stuff you want to sell. You can search for keywords or category, chat with the seller by his item’s page, log in with Facebook or email, like and share ads, and a lot more.
Besides uploading up to 3 images while posting an ad, This app allows you to also upload a 10-second video, this is a great feature that other listings classifieds apps do not have!
Users will be able to report ads or users and block/unblock inappropriate users to prevent getting chat messages from blocked people. They will also able to send Feedbacks to other sellers
woopy has also a verification email system, once a user signs up by email (not by Facebook), back4app sends a verification email based on the email address the user typed in the signup screen. People will be able to see if a user is Verified or not by entering his/her Profile screen.
The Categories names and images are stored into the Parse Dashboard, so you’ll be able to add new categories remotely without having to update the app.
Check its video preview to see it in action!

Since its backend is by Parse Server you don’t have to buy any domain/hosting, there are NO PHP files to upload to a web server so you’ll save some money for server side, also because back4app offers a generous free plan.


How to change images in the Categories class of my Parse Dashboard?

After importing the Categories.json file into your own Parse Dashboard, you have to double-click in the empty space between the edge of a cell and the blue image button to replace the existing images, check the screenshot below:

After importing Categories.json in my Parse Dashboard, I see no data

That may happen sometimes, it’s a bug in the Parse Dashboard, so in this case you must manually add rows and columns on your own.
1. Click Edit -> Add a column, choose String as type of data and type exactly category, then click ‘Add column’
2. Click Edit -> Add a column, choose File as type of data and type exactly image, then click ‘Add column’
3. Now you can enter the empty cells and insert the name of your first Category, doublie click in the empty cell of the image column and upload your first image.
4. Repeat the steps above for each category you want to insert in your Parse database.


How do I change the order of Categories?

The only way to do that is to remove all rows from the Categories class and add then again based on the order you want categories to be shown in the Home screen of the app since they get ordered by their ‘createdAt’ date.