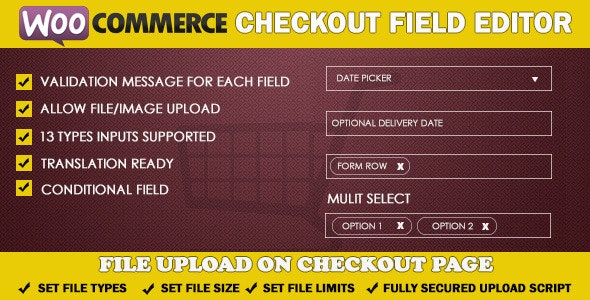 Fields appearance can be controlled by product id, category and user role.

This plugin allow admin to add 14 types of different input fields. Not only this, the core Billing and Shipping fields can also be updated, removed or re-order using drag and drop admin UI. All fields sent as order meta and invoice email.

You can drag/set different fields for different Product IDs, Category or even User Roles. Like if you want to show a Text input when certain category ‘Printing’ related product in cart so this plugin can handle this.

You can use Condtional Logic Fields for Order extra fields.

Following link will redirect to demo WooCommerce based store. You will see some input fields on product page. Add  this product to cart and proceed to checkout to see how this plugin works. Click Here

Extra comments from the buyer:
The UI might not be beautiful, but what it lacks in design it offers in features and flexibility. Highly recommended for any shop that needs a highly customized checkout form.

Extra comments from the buyer:
Great support – even nights & weekends. Patiently dealt with errors that were all mine. Great plugin. Does what it says easily, clearly & reliably. Highly recommended.

Extra comments from the buyer:
The author is very fast in replying to questions. As in, nearly immediate response. Very impressive. The plugin also works great too!

Extra comments from the buyer:
simply great, no words needed

Extra comments from the buyer:
Very good job, helped me solve a very important project, maybe you should improve browser support, thank you.

Where are other version?

3.76 stars
3.76 average based on 25 ratings. (more information)
© All Rights Reserved nmedia82
Contact the Envato Market Help Team
Quick Links Explore popular categories
by
by
by
by
by
by