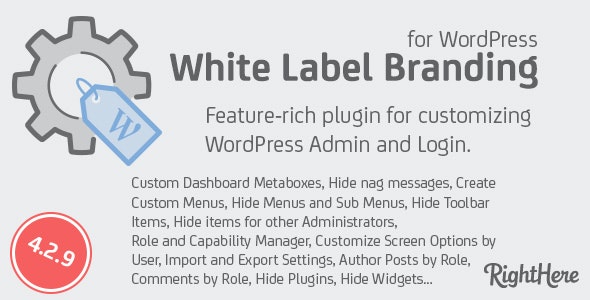 Are you a WordPress developer or a Web Designer who uses WordPress to develop websites for your clients?

Have you ever wished that it was easier to customize the menus and logos in WordPress and to decide which menus the users have access to?

With White Label Branding for WordPress you can do exactly this. Take full control over the branding in wp-admin and decide who has access to what features.

With the latest version of White Label Branding you have the ultimate tool for customizing WordPress admin and your login screen.

We have added a powerful Role and Capability Manger, which will allow you to create new user Roles and assign Capabilities.

You can add new capabilities for specific user Roles and you can even create a “fake” Administrator account. This can be used if you want to give your clients “admin” access, but still limit what they have access to.

The real administrator will also be hidden from the users list. This way a client with the “fake” administrator account, will never know that they don’t have full access to all features.

You can also use the new WLB Administrator feature, which we recently added. This will allow you to hide elements for other Administrators. Simply add the username of the Administrators that should be able to view all elements of wp-admin.

We have also added advanced color management of the entire wp-admin and you can create your own advanced login templates. When you enter a valid License Key for your copy of White Label Branding for WordPress you will get access to our Free Downloadable Content, which allows you to download our popular Visual CSS Editor.

This is not in the WLB Settings menu, but in the top right side of your wp-admin.

White Label Branding for WordPress uses our popular Visual CSS Editor. It will allow you to customize the wp-admin colors, styles and fonts. Choose from more than 800 Google Web Fonts.