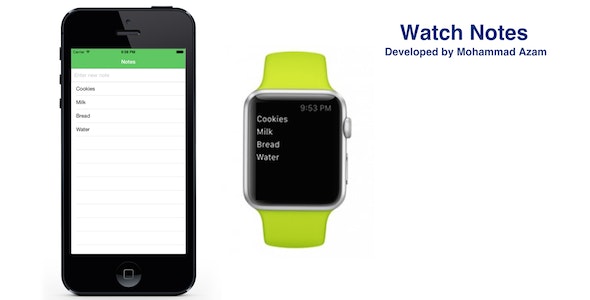 Watch Notes is an Apple Watch app which allows the user to share notes between iPhone and Apple Watch. User can create notes on the iPhone app and those notes immediately transferred to the Apple Watch device.

Apple Watch SDK is currently in beta and requires Xcode 6.2 iOS 8.2 beta to run. Apple Watch apps can currently ONLY be tested via a simulator since the device is not released.

This project is implemented in Apple’s new programming language Swift.

Make sure you have Xcode 6.2 with iOS 8.2 beta. Open the project and select “Watch Notes” scheme. This will install the app on your iPhone. Once the app is install switch the scheme to “WatchNotes Watch App” and build and run the app again. This will start the Apple Watch simulator. If you have not configured the Apple Watch simulator then please read the section above.

On each startup the notes are erased since they are persisted in memory. If you want to persist the notes then remove the call to the “deleteAllNotes” function.

Apple Watch SDK is still in beta and the API’s can change without notice in the future.

1.00 star
1.00 average based on 3 ratings. (more information)
© All Rights Reserved azamsharp
Contact the Envato Market Help Team
Quick Links Explore popular categories
by
by
by
by
by
by