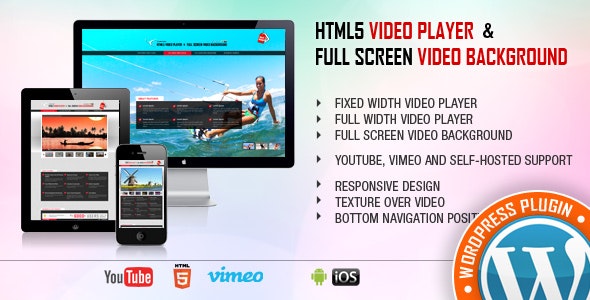 
IF YOU NEED ONLY THE JQUERY PLUGIN FOR THIS PRODUCT , YOU CAN DOWNLOAD IT FROM HERE : http://codecanyon.net/item/html5-video-player-fullscreen-video-background/8489365

It plays YouTube, Vimeo and Self-Hosted video files. For YouTube & Vimeo all you need to use is the video ID. The videos need to be public, not private or unlisted.

Over 30 parameters from where you can customize your player, including: autoplay, loop, colors, dimensions, show/hide video controllers, randomize videos…


If you need additional information don’t hesitate to contact us at office@lambertgroup.ro. We’ll try to answer you as quickly as possible.