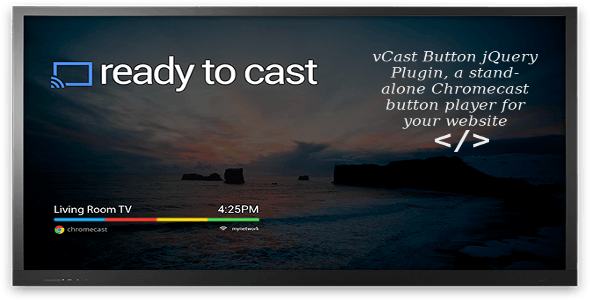 Versatile Chromecast button that lets you send video from your website to Chromecast. Works with many existing players. Scans your website for media at the specified HTML tag(s). Easy configuration of source videos with default settings, or set source video for Chromecast using simple options to the plugin

A must if you want to send high definition video to the Chromecast!

Integrates with your existing video player by simply placing and positioning an empty HTML element onto your existing player, then specifying this empty element as the container for the vCast button during initialization. Degrades gracefully in Firefox, IE, and whenever the Chromecast extension is not installed

Since Chromecast launched, people have hit the cast button more than 400 million times to enjoy their favorite sports, music, premium movies and TV shows, according to Google, who recently also launched Chromecast in an additional 11 countries—Canada, Denmark, Finland, France, Germany, Italy, Netherlands, Norway, Spain, Sweden and the U.K. Also the upcoming Android TV is Cast Ready, so you’ll be able to cast to it from your devices just like when using the Chromecast

Requires Chrome browser with Chromecast extension on a PC or desktop computer. On Android smartphones and tablets, Chrome for Android required.