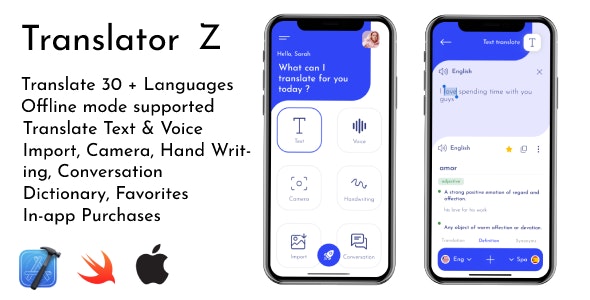 Translator Z is an iOS Text & Speech translator app developed in Xcode using swift 5. Users can translate in between over 30 languages and find the definition of a certain word as well as it’s synonym by using both Text and their voice. It uses Googles MLKit and language translation is supported wether online or offline, users just have to download a certain language if they intend to use it offline. Users can also mark their favorites translations for later reference.

Note: All images and icons are used for preview only and may not be included in the final purchase pack.

If you have any questions about customisation, please contact me via e-mail or through my profile page. I’ll help you as soon as possible.