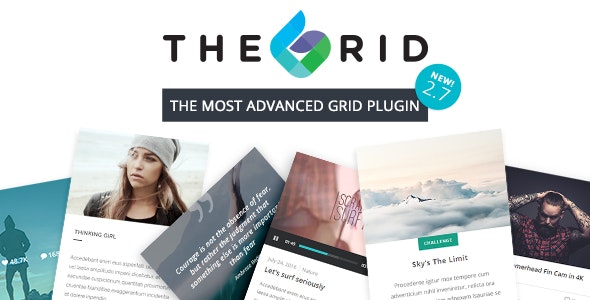 The Grid is a premium wordpress grid plugin which allows you to show off any custom post types in a fully customizable and responsive grid system. It is perfectly suited for displaying your blog, portfolio, e-commerce or any kind of Wordpress post type. This plugin support the following post format: standard, video, audio, gallery, link, quote. Possibilities are unlimited and can be easily controlled thank to a powerful admin panel.

We especially took care about the loading speed performance by optimizing the queries and have created a custom and lightweight jQuery script. We have also built a custom cache system in order to boost performances.
The Grid plugin is the most advanced grid plugin for Wordpress and also the only one with a 100% responsive touch slider. You can filter any kind of grid in this touch slider which is just unique. We have also added several filters for developer in order to add new skins, animations, navigation skins, preloaders animations. The Grid can be easily integrated in any Wordpress theme and with a custom style…

Note To Wordpress theme developers: The Skin Builder functionality requires a valid licence of The Grid in order to be activated.