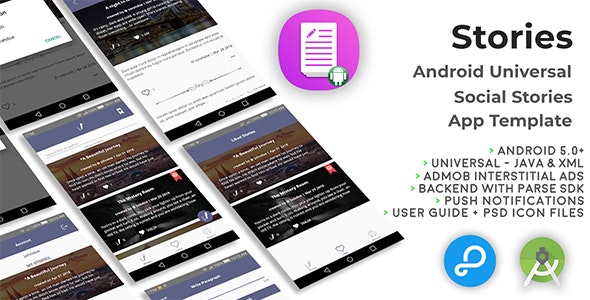 
Stories is an app template where you can post stories with a cover image, max 300 characters allowed, and users can reply to them by adding their own paragraphs and keep writing your story in a fun way. It’s great to see what your stories get to, paragraph by paragraph!
Users can like Stories and Paragraphs, as well as report content and Users to the Admin. You, as the Admin of the app, have to daily check your own Parse Dashboard for the reported content or users and take actions for them.


How do I rename the app’s package name?

Read this tutorial to learn how to rename a package name: https://hubpages.com/technology/Android-How-to-rename-an-app-package


Should I use the latest version of Android Studio to edit this template?


The demo APK crashes on startup

Make sure that the minimum Android version of your device is the one listed in the FEATURES section below. If the problem persists, please contact me through my profile’s contact form and send me the Logcat message of you get when the app crashes along with the steps you made to reproduce the crash. Please note that not all real devices print an error Logcat message, in this case just run the APK into the Android Studio’s emulator and you’ll surely get the red messages about your issue.


How do I remove AdMob interstitial ads?

You have to search for the following code in all java files -> onCreate() method, and just remove (or comment) it: