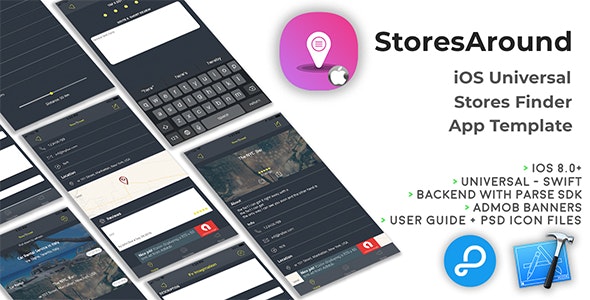 Both iOS and Android version can share the same Parse database

StoresAround is a Universal App Template where you can let people see and submit stores nearby, it has Localization service, search by Category and up to 100 Km nearby.
It has a News section that you can edit on your Parse Dashboard, as well as inserting/editing the Stores details and images.

Since its backend is by Parse Server, you don’t have to buy any domain/hosting, there are NO PHP files to upload to a web server so you’ll save some money for the server side.

You may also use the Adminca Panel as a great alternative to insert/edit data in your Parse Dashboard, after you’ll create your app on back4app, create a free account on http://adminca.com and create a new Panel, choose self-hosted Parse server and paste your Host, Application ID and Master Key in the relative fields (you can find them in Core Settings of your back4app panel)

4.60 stars
4.60 average based on 10 ratings. (more information)
© All Rights Reserved cubycode
Contact the Envato Market Help Team
Quick Links Explore popular categories
by
by
by
by
by
by