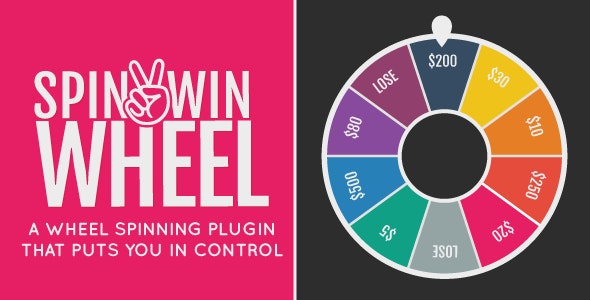 Spin results, prizes, win/lose, number of spins and more can be controlled using JSON data. You can also customize the look and feel of Spin2Win Wheel to bring it in line with your brand or color scheme, set the probability of winning, add your own custom prize data and it even has an anti-cheat mechanism to prevent players placing the wheel on a chosen segment.

Added ability to have 0 spins which generates a toast popup with custom message. Updated documentation to clarify some features.

Fixed some bugs. Removed hard-coded CSS via JavaScript (for the popups).

Probability values no longer need to add up to 100

This change makes entering values generated from other sources much easier to manage Fixes: Fixed some CSS bugs with scaling in FireFox and button centering in IE. here

You asked – we listened – Probability has finally arrived!

By adding the new “probability” property to the segment data you can now ensure that some segments are more likely to win than others. Jump to relevant docs here

You can now add your own data properties for each segment (in the JSON). You might want to assign a score or value for each segment or maybe some other hidden data. This data can be retrieved in the onResult event. More info here

You can now send JSON to Spin2Win Wheel using PHP. Check out the script here.

The documentation is here.