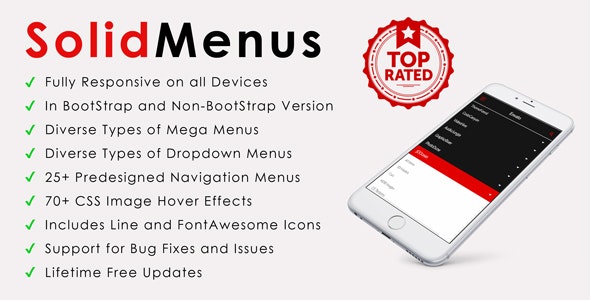 “If these menus work for professional Web Developers and Companies,
It will definitely work for you!

“This is the LAST Mega Menu that You Will EVER Need”

1. Get Your Responsive Menu Projects Done in Olympic Record Time!
2. Save the Headache Coding for a small amount.
3. Save a Ton of Valuable Time for a cheap investment.
4. Increase Web Traffic and Sales by Utilizing this Mega Menus
5. Do not Lose Out on a Top Quality Mega Menu and Buy Now!

These are the Predesigned Responsive Mega Menu included in the Product

Multiple Dropdown Levels to the Right

And Lots Lots More! All of these for a Price of Peanuts!!!

Create an Ultra Responsive yet Beautiful MegaMenu navbar for your next site. It uses CSS3 Animations and provides a modern style navigation look and feel in your website.

These sets of Responsive Mega Menu utilizes the Standard “navbar” framework from Bootstrap 3.0. It can work on Fixed and Responsive Layout.

SolidMenus are 100% responsive in design and layout. It has the capability to include other Bootstrap components such as the fluid grid classes, column grid system, widgets, google maps, tables, forms, carousel elements, buttons and varieties of more bootstrap elements

At the moment, It is the Second Best Rated Navigation and Menus in the CSS Category of CodeCanyon

Do you want a JavaScript Version of this Menu With Form Validation and sets of additional 120+ Hover Effect? And with 3 Modes of Responsiveness?
Buy it here!

This is not a WordPress plugin my friends

What our customers are saying about our Responsive Mega Menu

“The Mega Menus are constantly updated and the author is very open to suggestions!”

“I thought the demo files has already a lot to offer. I am surprised by the amount of work after I bought the product. There is way way way lots more. Best dollars that I have ever spent!”