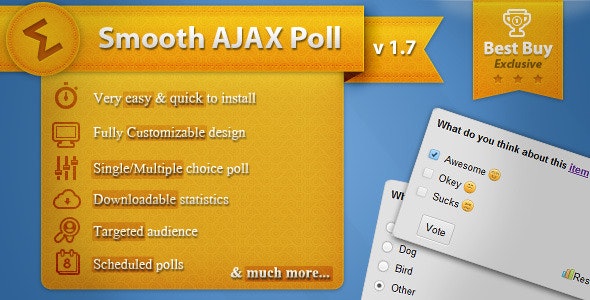 What is Smooth Ajax Poll ?

Smooth Ajax Poll is the most complete poll solution that has been made, it’s a simple yet advanced poll, entirely written in PHP/MySQL/jQuery and AJAX,it’s so user friendly and can be integrated easily on any given website that needs a poll (in less than 1 minute).
No matter how your website design is,you can edit the poll design in few seconds to suit your needs.some other features are listed below .

The top 10 reasons why you should have Smooth Ajax Poll are : And much more …

Is it hard to install ?

From 0 to 100% installed in few easy steps which will take you less than 5 minutes ( Guarenteed! )
How hard was that ?.

What my customers think ?

seuntech : i have bought almost all the poll script on this site, yours is the best thanks

Arix: I would recommend this to either people with a lot of web knowledge or noobs (like I). Really easy user guide and if you don’t understand anything emonik is extremely helpful

Thank you for all your help!

irie: Seriously the best support I’ve ever received from anyone in the Envato suite. You have been great – looking forward to buying more of your work in the future emonik!!

AD2009: Guys and girls, if you’re reading these comments before purchasing.. then you can just move on to the purchase button! I purchased the script yesterday and had some issues with the folder path thing to get it to work. After giving up I wrote the comment above (incl a separate similar mail with ftp login), and today Emonik emailed me and had sorted everything out! OUTSTANDING support! 5/5
And beside that.. The script is awesome

safaoi: That was magnificent support, many thanks for your help.


As you can see +250 buyers are satisfied with Smooth Ajax Poll,so why don’t you give it a try and see by your self ?

Demo: Here .
Some other features like the poll area managements are disabled in demo

4.11 stars
4.11 average based on 57 ratings. (more information)
© All Rights Reserved emonik
Contact the Envato Market Help Team
Quick Links Explore popular categories
by
by
by
by
by
by