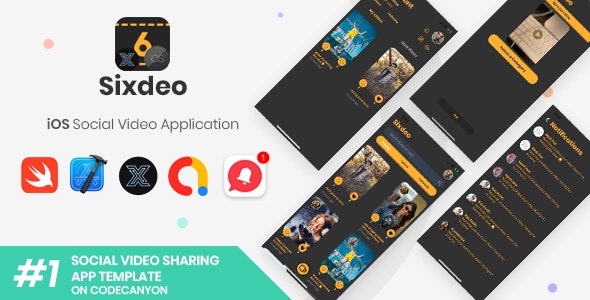 Sixdeo is a great solution for you to quickly build a mobile app where people can watch and upload short videos to show their skills and talent, even if you don’t know how to code

Sixdeo is a full-working template (UI + Source Code) where people can post or watch 6-second short videos and share them to the community.
Users are also allowed to report inappropriate content/users, like and comment videos.

The Admin can daily check the database for reported content or users and take action for it, as well as manually edit data in the Database.

• Check out the Features section below to see what this app does.
• Read the online Documentation to learn how to configure the template’s features and the database.
• Check out the demo Database, login as:
Username: demo
Password: demo
• Keep an eye to the Change Log on the bottom of this page when an update gets released.

The backend of this template is XServer, so you can either buy the XServer REST API an install it on your own VPS server, or create an account on XServer.app and a Database for this app.
After performing the configurations mentioned below, you will run the app and see no content, so Sign Up with a test user in order to create a test account and start testing the app.
NOTE: in case you want to implement your own backend to this template, you do not need to buy the XServer API, nor create an account on XServer.app, but please be aware that implementing a different backend to this template must be performed by you or your developers.

Storyboard, iOS 11.0 and above, Universal – Run your app on all iOS devices

Backend with XServer – Built on a great and reliable BaaS that offers many features with just a few clicks, it’s super easy to create and set up a database on XServer.app, as well as use the XServer REST API hosted on your VPS server.

Watch and post Videos – Users are free to upload an unlimited number of videos of a length of 6 seconds (this duration is also customizable in the code by the Admin). People can like and comment the posted works.

Search videos by keywords and Categories – Use the top search field to search for posts by typing your desired search terms, or tap the Categories in the horizontal list.

Report inappropriate Users or Content – People can help the Admin by reporting abusive posts or users, this is a good feature to build a stable and reliable community.

Follow your favorite people – In the Users Profile screen you can follow them and them and then see their posts in the Home screen, in the ‘Followed’ category.

Notifications screen – Check out your account’s activity, from likes to comments and followers. If you tap a row you’ll be redirected to the User’s Profile screen.

AdMob Interstitial ads – Get some revenue from full-screen advertisement banners.

XServer API – You can either create an account and a Database on XServer.app, or buy the XServer REST API and host it into your own VPS server.

Your support is always greatly appreciated, from comments to product’s reviews, so please click here to rate your purchases!
Show More Show Less