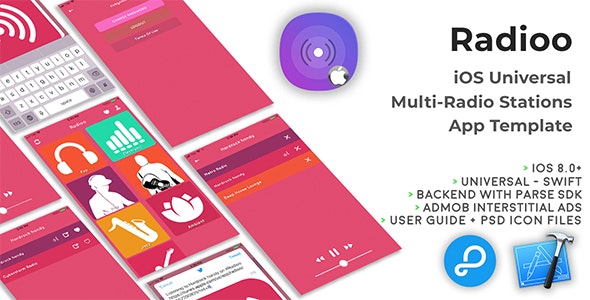 
Radioo is a Universal App template which stores free online radio stations into a flexible Parse Dashboard database hosted on https://back4app.com all .m3u file links from SHOUTcast.com. You have to download the M3U files and extract the streaming URL from them, then simply paste them into your own Parse Dashboard to create playlists.
Please note that since this app plays music with AVPlayer, you can also play .pls or .mp3 files, the important thing is that the string of your link ends with .pls or .mp3.
You can play radio stations anywhere with a 3G or WiFi connection, add radios to favorites (login/signup required) and select your radio channels by Genre, and share the radio you’re listening to the world.

Since its backend is by Parse you don’t have to buy any domain/hosting, there are NO PHP files to upload to a web server so you’ll save some money for server-side.

You may also use the Adminca.com, a free CMS panel for Parse SDK as a great alternative to insert/edit data in your Parse Dashboard, after you’ll create your app on back4app, create a free account on http://adminca.com and create a new Panel, choose Self-hosted Parse Server and paste your Host link, Application ID and Master Key in the relative fields (you can find them in Core Settings of your back4app dashboard)