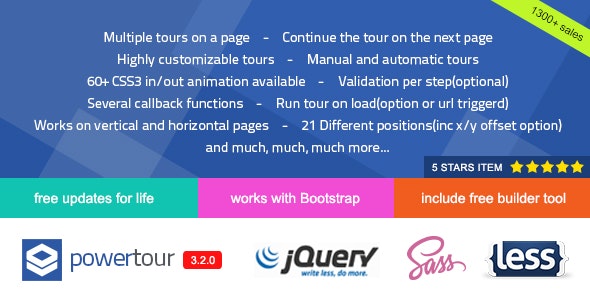 Power Tour is a powerful creative jQuery tour plugin, which can be used as a tour, helpers, guides or tooltips. The plugin is pretty powerful and has a lot of options which gives you the power to build a very cool tour.
Use the power tour plugin for your website, products, applications, landing pages or something else.

Yes you can use HTML like forms, images, videos and more in the tour

All of our files come with free for life updates, so you dont have to pay for an update. All of the updates are logged so that you can see what has been changed, added or remove, this way you dont have to worry about your modified files.

A couple of reviews

4.37 stars
4.37 average based on 46 ratings. (more information)
© All Rights Reserved CreativeMilk
Contact the Envato Market Help Team
Quick Links Explore popular categories
by
by
by
by
by
by