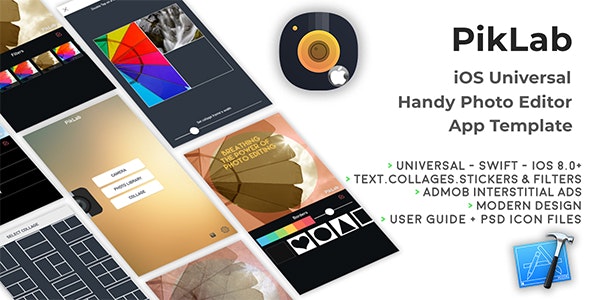 
PikLab is a handy photo editor app template similar to the popular PicLab app on the AppStore, it is Universal and has all the major features that a photo editor needs to enhance your pictures and share them to the world.
The Home screen allows you to pick photos from Gallery, take a picture with the built-in Camera or make a collage of pictures. It also has a couple of buttons where you can open your Instagram page and enter the Settings screen. The Collage screen offers 16 pre-made collages. After you took a picture, you can crop, scale and move it as you wish in the Crop Image screen. You can also select a pre-defined background for the crop area or pick up a custom one from your Gallery.
The Image Editor screen offers 6 tools which are Frames, text, Stickers, Textures, Adjustment and Filters (for pictures). You can edit those tools as you wish in the code or add new frames, stickers, fonts and textures. The Settings screen offers the possibility to rate the app on the App Store, check out your other apps and send feedback by email to the Admin of the app (you)