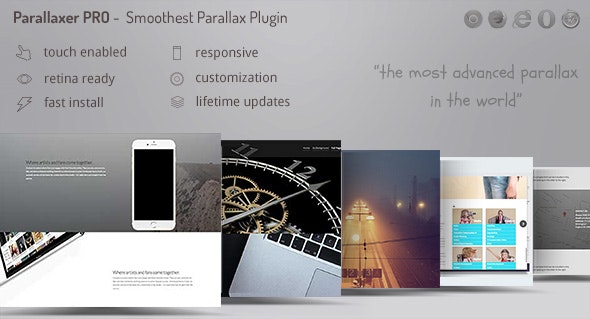 DZS Parallaxer is a script that turns any content into a cool parallax effect. It works smooth with any content you throw at it, images and even sliders, video players, basically any html content. It’s also the parallax that works flawless because of the algorithm behind.

Wow your visitors with DZS Parallaxer and install easy in any template, and setup any content in any size.

I notice on your demo page(s) that when I scroll up or down, there is a slight time interval before the background parallax image stops moving (I think this is called easing) ... I’d like the image to stop parallaxing / moving as soon as I’ve stopped scrolling – is this possible? I hope you know what I am talking about.

You have a duration option – if set the 0, the effect is instant

could this parallax script be implemented into a simple slider like flickerplate? I’ve been trying to do this with other parallax (free) scripts online and I just cannot get it right! I know this is an out of the box kinda question.

It can be implemented of course in a slider, if the slider supports html content