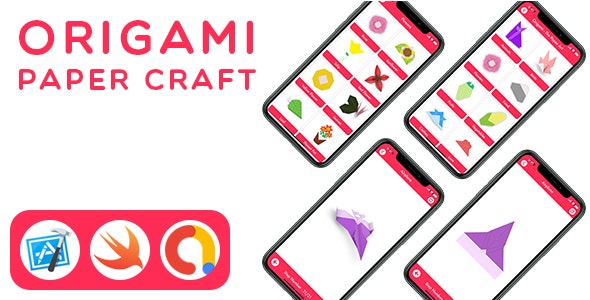 Origami Art & Paper Craft – Learn how to make origami | Art of paper folding through animated steps is a beautifully designed and wonderfully crafted iOS application to help you learn the art of origami paper craft through step by step animated instructions.

The user interface design and usability experience are beautifully designed with modern and latest trends. Along with that integration of Admob Ads, both banner ads as well as interstitial ads, makes it a perfect and ultimate choice.

Origami is the ancient Japanese art of paper folding. Origami has become increasingly popular in Japan and the rest of the world. Many people enjoy the challenge of learning to fold traditional and non-traditional origami creations.

Let’s take a quick overview  at the fetaures of this iOS Origami instructions application to learn the art of paper folding and how to make origami:

Get the app right now! We bet, you will really enjoy this Origami application and it will be real fun learning the art and craft of paper folding.