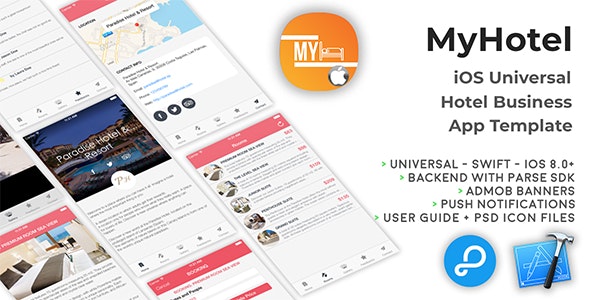 
MyHotel is a complete Universal app template you can use to create an app for your own hotel without needing a website.
You can update your Hotel data (name, description, gallery, rooms, etc.) via your own Parse Dashboard, so you don’t need to submit updates to the App Store when you have to add/update some info about your business.
You can also send Push Notifications to all registered devices through the Parse Push web console on back{4}app.

Since its backend is by Parse Server you don’t have to buy any domain/hosting, there are NO PHP files to upload to a web server so you’ll save some money for the server side.

You may also use the Adminca.com, a free CMS panel for Parse SDK as a great alternative to insert/edit data in your Parse Dashboard, after you’ll create your app on back4app, create a free account on http://adminca.com and create a new Panel, choose Self-hosted Parse Server and paste your Host link, Application ID and Master Key in the relative fields (you can find them in Core Settings of your back4app dashboard)