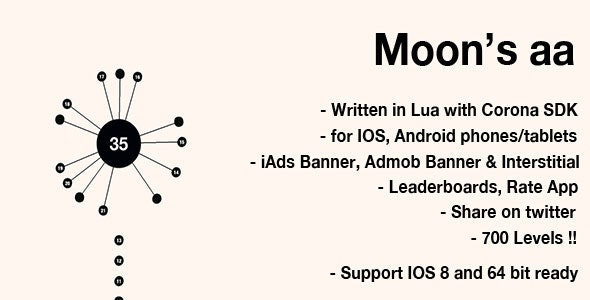 “Moon’s AA” is mobile game similar to general adaptive’s aa or lucky wheel for IOS and Android. It supports all Corona SDK editions. It is written in Lua for Corona SDK and uses composer library to manage scenes/screens. the code is clear and easy to be extended as you need. 700 levels included!

1. Written in Lua language (Use Box2d as physics engine)

4. 700 levels included and you can create more easily

5. Tutorial video for customizing this game

6. Code is very clear, GameScene.lua has less than 500 lines of code

About License: According to Envato rules, You MUST purchase an Extended License if:

1. You plan to sell your own version of this app as a PAID app on app stores, including( but not limited to ): the AppStore,Google Play Store, or Windows Phone Store.

2. You plan to provide In-App Purchase in your own version of this template (which means that your users can get charged of money).

3. You plan to sell your own version of this app on Flippa and/or similar markets.