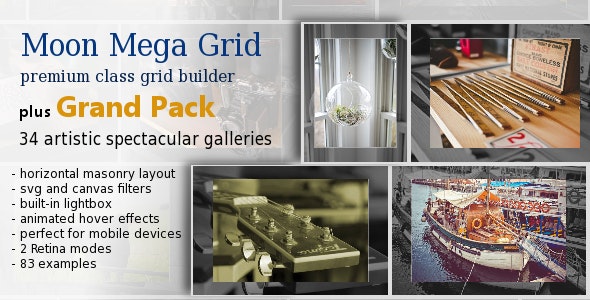 If you are a pro in web-design or photography

Create your unique artistic spectacular gallery for your photos with variety of beautiful animated hover effects, using templates and examples, color schemes, svg and canvas photo filters and other tools!

is a collection of 34 Artistic Galleries:

It is an unprecedented set of wonderful templates with original animated captions.

Every template has been tested on various mobile devices and simulates the ‘hover’ effect for them.

Many templates give possibility to choose a color schema.

Every template is stored in its own folder with coffeescript, javascript, less and css files. So it’s easy to create custom template on the base of existing one.

Usually there are two ways for arranging ‘hover’ effect on mobile devices: you can ignore it (first) or you can use buttons (second).

I suggest the third way: simulation of a ‘hover’ effect after the first touching an icon. After the second touching a ‘click’ event is simulated.

This approach is fully realized in the Grand Pack.

Of course, You can abandon this approach by simplifying of an appropriate template.

Due to memory optimization Moon Mega Grid gives the possibility to show up to several thousand items on one page. Even if you have thousand items on your device, crash is hardly to happen if you rotated the screen and the view was rebuilt.

There are 2 Retina modes:

Of course, you can switch off Retina mode at all.

Usually grids eat resources. There are a lot of DOM elements. Thera are heavy images.

Moon Mega Grid is based on principles, which allow minimize the mentioned above effects:

Because of that you can place up to several thousands images on one page even while using devices with Retina screen and photo filters.

All SVG-filters are supported. They will add artistry to your page.

Moon Mega Grid has its own small library for canvas filtering.

You can use combination of canvas filters.

In most circumstances SVG-filters are preferable because they are faster.

From the other side, canvas filters works well on old versions of Android. IE8, IE9 support them too.

You can set Moon Mega Grid to use SVG-filters in browsers which support SVG-filters. Otherwise the browser will use canvas filters.

There is another possibility for IE8, IE9: you can use native MS-filters.

You can create your own templates or modify templates from Grand Pack.

Template object includes a markup string and a callback function.

It can include additional objects of templates for mobile devices, IE9 and IE8, IE8.

The template tool is based on the Underscore.js template function.

Custom templates can be stored in separate files.

Initially the whole script was written on CoffeeScript that guarantees a high level of code quality.

Source files include CoffeeScript files, structured by classes, as well as less files and css files.

If you don’t like CoffeScript, you will find the uncompressed javascript bundle file.

Every template of the Grand Pack has its own folder.

Grand Pack v1.3: Fixed a bug in the Light template

Moon Mega Grid v2.1: The factory function was added that can be used instead of the constructor

Grand Pack v1.2: All templates have been changed to add this new functionality

5.00 stars
5.00 average based on 6 ratings. (more information)
© All Rights Reserved alquimisto
Contact the Envato Market Help Team
Quick Links Explore popular categories
by
by
by
by
by
by