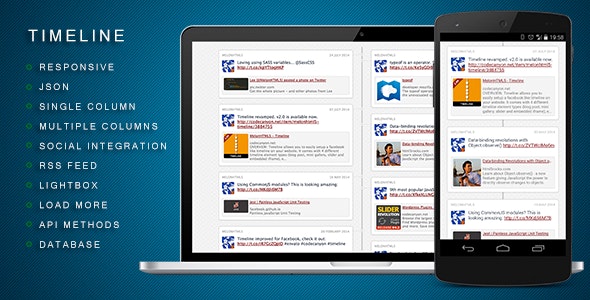 Timeline enables you to build visually-rich interactive timelines on your website. It lets you display blog posts, videos, photo gallery, slider…etc with plenty of customizable options, which should suit all your needs. Timeline also accepts JSON as data source which makes it extremely easy to integrate it with your own database in any programming languages.

Please give it quick rating if you like this. If you have any suggestions/feature request or you find a bug, you are more than welcome to contact us and we’ll address them ASAP. DIFFERENT DISPLAY OPTIONS
Timeline event can be displayed as a Blog Post, Slider, Gallery, Video and so on. Each display type offers unique options such as Lightbox, Slideshow, Preloading …etc.

LIGHTBOX
A full CSS3 (jQuery Fallback for IEs) lightbox is included. You also get the option to turn it on or off.

ONE DIV INSTALL
Yes, just one DIV, no complex HTML is required.

JSON DATA SOURCE
Timeline lets you use JSON as data source, so you can easily integrate it with your own database in any programming languages.

LOAD MORE
Displaying a large number of data in one timeline instance with a load more button which loads more data automatically on clicking.

DYNAMICALLY ADDING DATA
Wanna implement your own AJAX data load for Timeline? No problem, you can use the built-in API to add new data to an existing Timeline instance.

SOCIAL INTEGRATION (see Twitter Timeline Demo and Facebook Timeline Demo)
You can also use its API to easily integrate Twitter, Facebook or any other social network into the Timeline. Examples are included in the files.

FULL API FUNCTIONS (for advanced used)
Plenty of API options are also given (e.g. turn animation/separator on or off, set date format … etc), which allows you to configure the timeline to suit your own needs.

CSS3 animations + jQuery Fallback for IE
All animations are written in CSS3 for better performance, and old IEs will get jQuery animations.

SUPPORT ALL MAJOR BROWSER (IE 7+, Chrome, Firefox, Safari, Opera)
Timeline has been thoroughly tested in all major browsers and mobile devices, performance is also optimized for each browser. So we wanna say it’s 99.99% bug free.

DATA ORDER
Elements are ordered by time automatically. You can also set the order to be DESC or ASC.

MOBILE DEVICE SUPPORT
A full example of mobile mode is included in the files, so if you are to build a mobile website, this is what you need.

4.45 stars
4.45 average based on 77 ratings. (more information)
© All Rights Reserved MelonHTML5
Contact the Envato Market Help Team
Quick Links Explore popular categories
by
by
by
by
by
by