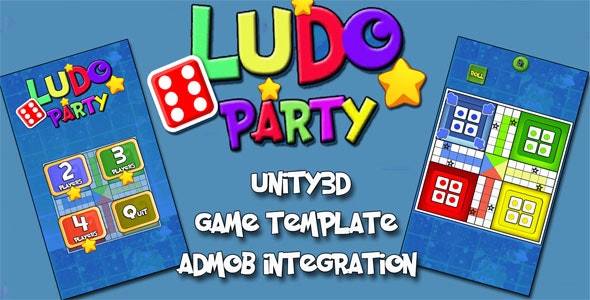 LUDO PARTY is a strategy board game for two to four players developed in Unity3D, in which the players race their four tokens from start to finish according to the rolls of a single die.. This Ludo game template Unity3D Project is integrated with ADMOB.

At the beginning of the game, a player places his or her four pieces in the starting area of their color. In this game, the players have to race their 4 tokens from the starting to the finishing point. Ludo Source Code has been written in such a way that can easily be understandable and has been properly commented and documented within each script.

INSTRUCTIONS: How to setup Ludo in Unity3D

Below are the intructions to setup LUDO game template in Unity3D as follows:

3.) Change the platform from Unity3D as File -> Build Settings and switch to Android or iOS platform

5.) Change the default orientation as PORTRAIT as game has been developed in PORTRAIT mode. (File-> Build Settings-> Player Settings-> Resolution and Presentation – > Default Orientation should be PORTRAIT)