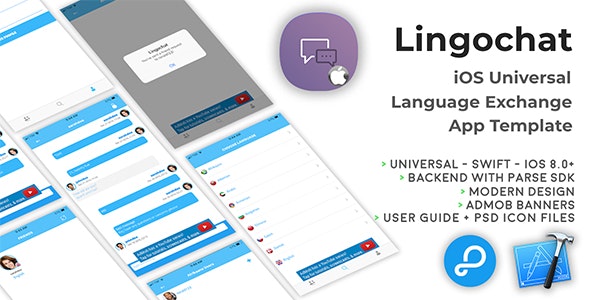 
Both iOS and Android versions can share the same Parse Dashboard on back4app.

Lingochat is a Universal App Template where you can search for foreign people all around the world, based on their language, send a friend request and chat with the users who accepted it in order to have some fun with language exchange.
You can also sign up selecting a nickname and your native language so people can find you too and ask you to chat.
You can also block/unlock users in the chat screen, edit your nickname and email anytime. Email is required on registration for password recovery purpose.

Since its backend is by Parse you don’t have to buy any domain/hosting, there are NO PHP files to upload to a web server so you’ll save some money for server side. Read more info about Parse SDK and back4app here: https://hubpages.com/technology/Parse-SDK-will-not-shutdown-in-thanks-to-back4app


We’ve recently found out that some developers have bought our app templates, reskinned them just a bit and put them on sale on other source code markets similar to CodeCanyon, saying that they developed and own such source codes.
That is a serious copyright infringement, developers who buy our templates are allowed to reskin and sell them as apps on the App Store (accordingly to the License type they’ve purchased a template for) but are not allowed to put our original source codes for sale on source code markets, including CodeCanyon. We will report developers who made copyright infringements to the competent authorities. Thanks.