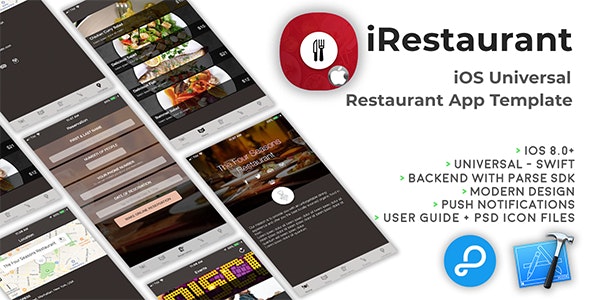 iOS and Android versins can share the same database on back4app


iRestaurant is a Universal App Template where you can show info about your Restaurant and send Push Notifications to all registered devices without having to update the app on the App Store, after applying a few configurations in the code (the User Guide explains what to do) you’ll be able to edit Menu, Gallery, Restaurant name and description, Events and so on via your own Parse Dashboard on back4app.com or via the Adminca CMS panel for Parse apps (it’s all free).

Its backend is by Parse SDK, any way you only have to own a domain/hosting to upload a simple PHP file to receive reservation emails. You may also use a free hosting service like http://000webhost.com, it’s free and reliable.

Sure, start by reading this tutorial, it will surely help you get familiar with Xcode and its UI interface: https://hubpages.com/technology/iOS-About-Xcode-and-its-interface