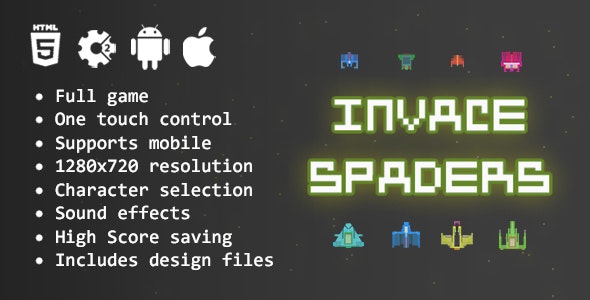 Invace Spaders is a simple space adventure game, where you try to defeat as many aliens as possible before being destroyed.

This is and endless game, where the player can go on forever as long as it’s alive. There are two bonuses in the game: One slowing down enemies for 5 seconds when it’s been collected by the player, and the other spawning a “laser line” which clears out every enemy on the screen.

The game has 4 difficulty levels, with each difficulty spawn rate of the enemies and collectables changes. The game also has a character selection feature. There are 4 playable fighters in the game, with each unlocked with the player’s high score.

Made in Construct 2, without any third party plugins/behaviours

If you liked the game, please don’t forget to rate it here!

And while you’re here, why don’t you check out my latest game Jurassic Theft as well!


Here are my other games too!