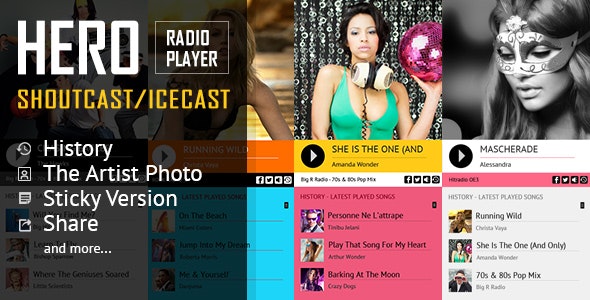 IF YOU NEED THE WORDPRESS PLUGIN FOR THIS PRODUCT, YOU CAN DOWNLOAD IT FROM HERE : https://codecanyon.net/item/hero-shoutcast-and-icecast-radio-player-with-history-wordpress-plugin/19364283

The player will display the photo of the current playing singer, if it is present in the database

Parameter to set the radio player in sticky version. Additional parameter to only show the play button.

Over 30 js options from where you can customize your player, including: width, autoplay, colors and other parameters.