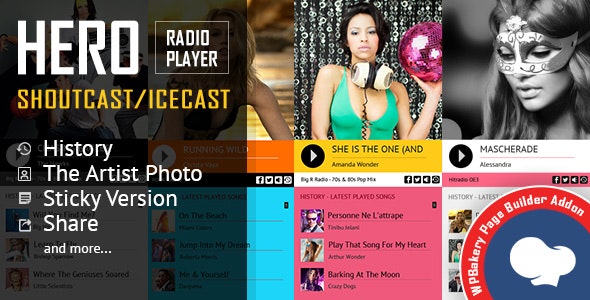 This is an addon / extension for WPBakery Page Builder

How to install and use the add-on: https://www.youtube.com/watch?v=L4OzTut8law

The player will display the photo of the current playing singer, if it is present in the database.

Parameter to set the radio player in sticky version. It will be sticky only on the page it was inserted. If you want to be sticky on all pages, you should buy the WordPress plugin instead: https://codecanyon.net/item/hero-shoutcast-and-icecast-radio-player-with-history-wordpress-plugin/19364283

Over 30 options from where you can customize your player, including: width, autoplay, colors and other parameters.

Note for IOS & Android (restrictions imposed by Apple & Google):
The autoplay will not work because IOS (and Android) has disabled autoplay feature and it can’t be controlled from JS.