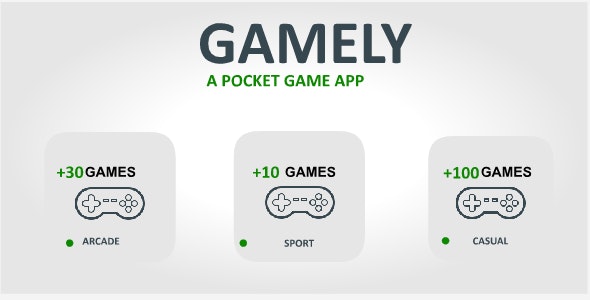 Gamely is a perfect android game that allow you to add HTML 5 games and make it playable throw an android app , Gamely work like a pocket games for you and for your kids ,you can play arcade games,sport games,strategy games,funny games and more awesome games , in the other side as a developer you can easily add more games to a real time fire base database , just upload your HTML 5 games to your server , put data into fire base real time database and see your games in your app , game pocket include a sophisticated web view able to play rich media and rich games

Gamely contain Lightweight html 5 games can be played via mobiles and tablets, also include a set of new kids games, No need to download multiple large games ,with gamely you have an awesome pocket game with a full set of new games , so if you are a fan of arcade games you can play zombies shooter game to kill zombies in adventure world , kill zombie and win power ups , fight your self scores, earn points and collect weapons. that’s not all , pocket game gamely include strategy games most popular android games , play games card , play Run into death and shoot incoming zombie, kill dead in horror world , Gamely also doesn’t forget fans of sport games.