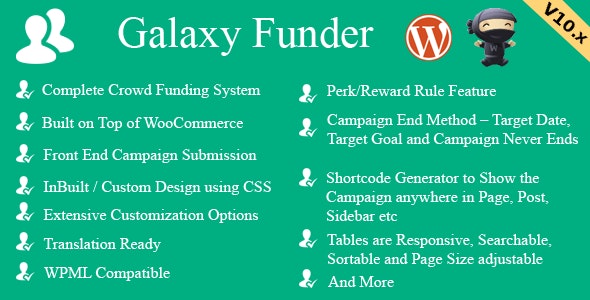 1. Fundraising by CrowdFunding
It is the regular type of running a Crowdfunding Campaign for raising funds.

2. Product Purchase by CrowdFunding
If someone wants to buy one or more products in your site but he/she doesn?t have money to buy then the buyer can create a Crowdfunding campaign to buy the products. The buyer can then promote the campaign with his/her friends for funding. Once the goal amount (which is the product price) is reached then the products are automatically added to the campaign creator?s My Account purchases.

You can also give a Product from the WooCommerce Shop as a Perk/Reward. This way you can Sell Fundraising Products and raise funds using Crowdfunding.

How to Upgrade to a newer version of Galaxy Funder?

If you are using an older version and want to upgrade to the latest version of Galaxy Funder then please do the following steps.

Please note you will not lose any settings values, data etc by following the above steps.

For support, feature request or any help, please register and open a support ticket on our site.

4.37 stars
4.37 average based on 38 ratings. (more information)
© All Rights Reserved FantasticPlugins
Contact the Envato Market Help Team
Quick Links Explore popular categories
by
by
by
by
by
by