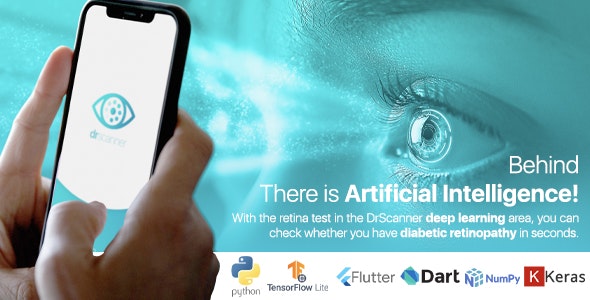 DR Scanner mobile app was developed with Flutter. In terms of code structure, it was written with the principle of clean code.
The interface is simple and very easy to edit.

It can be run on both Android and iOS platforms.

It has an application structure that can be installed on Google Play Store, App Store and Huawei App Gallery platforms.

It can be easily run offline as there are no options such as database and remote connection.

Developed with a modern, simple user-friendly interface using the advantages of Flutter, DRScanner makes it easier for you to detect Diabetic Retinopathy. And in seconds!

All the steps that need to be done in detail are included in the documentation.

It should not be thought of as just an eye scanning application.

If the Tensorflow model is changed, it can also be used to detect other diseases.

High glucose level disrupts the structure of the retinal layer in the eyes and causes diabetic retinopathy which is characterized with new pathologic blood vessels in the eyes. Although diabetic retinopathy is not clear at the beginning of the disease, it is the most common problem in people who have diabetes, and causes blindness or cloudy vision if it is not diagnosed at the beginning of the disease. For early diagnosis of diabetic retinopathy, regular fundus controls and examination of the edema in the vessels of the retina are made periodically by ophthalmologists.