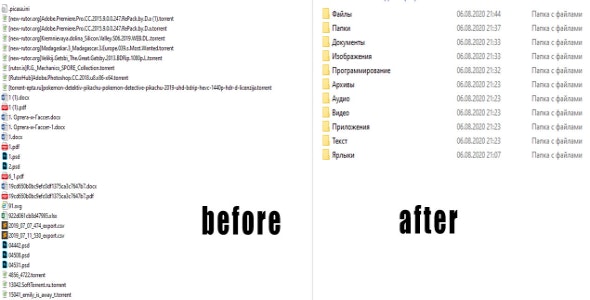 Purpose: In 1 click to clean up a folder with a million files inside, which, perhaps, are a pity to delete.

Description: A standalone Python 3 script that can be run on any OS. The program is given a directory, if necessary, files and directories that need to be ignored, and also a file that works with the Excel program is filled in separately, in which the rules are written in a tabular and understandable form, according to which sorting by folders will take place.

Annotation: The script is written in such a way that it can be easily connected to any existing system. In this case, you just need to import the necessary functions from the main script. For other developers, this will not cause much difficulty, since the script is represented by only one file, in which there is quite a bit of functional code. In the case of the bulk of buyers: you just need to download and run the script, as described above in the launch instructions. For all questions, you can also contact me personally.