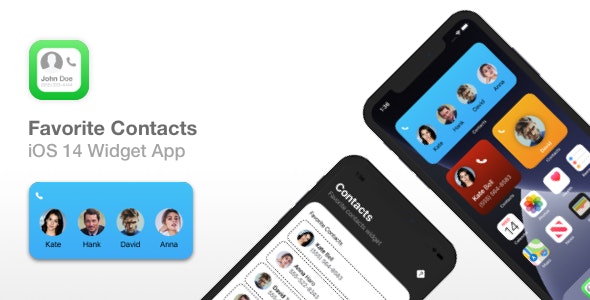 WHAT DOES THIS PRODUCT OFFER YOU
The app as shown in the video demo. Feel free to ask questions before buying. The full source code contains all the UI code, widget code, and other configurations. Sharing the data between the app and widget is done via the Apps4World framework, this way it’s easier to share common code between multiple targets. The framework code is not included because you won’t really need it, there is nothing to change in the framework. Also, the whole in-app purchases process is handled by the PurchaseKit framework (source code not included), but you can change the UI for the in-app purchases as you prefer. Keep in mind that the PurchaseKit version that comes with this app doesn’t support in-app subscriptions.

Assistance will be provided for any code-related questions.

WHAT DO I NEED TO GET STARTED
You will need a Mac computer with Xcode 12 installed. This app as you probably know works on iOS 14+. Also, it’s very important that you have an Apple Developer account because widgets require App Groups in order to share data between the widget and the app, and App Groups can be properly created only if you have a developer account.

HOW DOES IT WORK
- The app will launch and the user will be able to import/select contacts from their iOS contacts app. By default, the user can select only 2 contacts unless they purchase the pro version via in-app purchases. You can customize how many free contacts they can choose.

- All selected contacts are stored in the UserDefaults. The medium size widget will always show up to 4 contacts, sorted by name. If you want to delete any contacts from the medium widget, you can simply double-tap that contact to remove it. Please note that this customization is available only from within the app. When the widget is on the Home Screen and the user taps on a contact, the app will launch, showing an action sheet (alert as shown in the video), which will display the phone number for that selected contact.

- The small size widgets are dynamically configurable. This means that you can add as many small widgets as you want on the Home Screen, then long-press on a widget until you see the Edit Widget option, select that option then assign a contact for that particular widget.

- You won’t be able to test the entire app in the simulator since you can not make phone calls. It’s recommended to test this on a physical device.

NOTE:
Whenever the user selects a contact either from the medium-size widget or taps on a small size widget, the iOS won’t make a phone call right away, instead, it will open the app and show an alert/action sheet with the phone number of that particular contact, and only after the user taps the phone number, the iOS phone app will start dialing that phone number.

As always, we wish you good luck with this product and don’t forget to subscribe to our YouTube channel, so you could be the first one to know when a new app template is released.