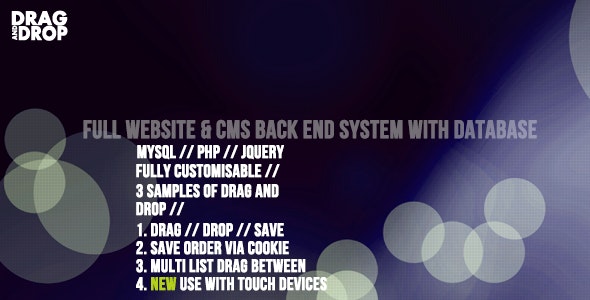 We are sorry for being away, we have now updated to v4 with a new site, new features and updated coding

Using Jquery, CSS, mySQL, Ajax and PHP the this purchase will give you three examples for how to use and display sortable lists.

NEW FOR VERSION 2 - Save your list via a COOKIE session. Easy to name cookie, limited Developing required. Quickly change and add to multiple lists - Also move and drag between mulitiple lists. Have an unlimited number of lists and using a simple class technique, connect these together and drag and drop between. Add a format to differentiate quickly and easily.

NEW FOR VERSION 3 - Now able to use the drag and drop with touch devices such as ipads, iphones and other tablet devices

The second example is a simple sort list that will allow you to produce a list of varying length and apply a drag and drop feature to it.

The third example shows how the functionality can work across a multiple column format.

4.25 stars
4.25 average based on 16 ratings. (more information)
© All Rights Reserved sowebdesign
Contact the Envato Market Help Team
Quick Links Explore popular categories
by
by
by
by
by
by