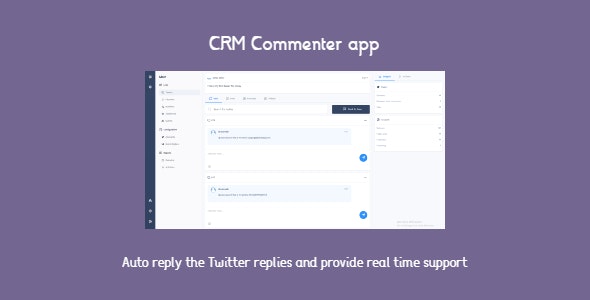 CRM Commenter is an app for the Midrub CMS which allows to automatize the replies on Twitter. Users of this app are able to create a list with automatic quick replies which will be used to auto reply the received replies on Twitter.

This app could be sold as SAAS service and it could be limited by  number of published posts per month.

The CRM Commenter app has a lot of features and below you could see all of them, grouped by sections:

In in the page Accounts, users could connect their Twitter’s accounts with the scope to follow them for new activities. The connected Twitter accounts if have the enabled status will be followed by the app and all new received replies will be saved in the database.

In the account’s page is possible even to create a default response which will be used to auto reply all new received replies. The default reply will be used only if there is not sent already a quick reply.

A quick reply condition is a list with keywords which should be in the received replies and the accuracy option which allow to decide how much should meet the replies content the keywords of a Quick Reply.

When a received reply contains one or all keywords of a Quick Reply will be verified it meets even the accuracy criteria. If the percentage of the found keyword is higher than the accuracy, the Quick Reply response will be used to create a new reply on Twitter.

The categories in each Quick Reply allows to group the quick replies.

In a tweet page the replies are grouped in 4 tabs:

The search engine allows to search in the tweets replies and the status if is active means the tweet was updated in the last 1 hour.

If the received replies contains a number greater than 6 characters, it is saved automatically as Phone Number in the CRM Commenter app. The app can’t know if is a phone number or no, it saves and the user could export the phone numbers in a CSV file or delete them.

The app is able even to identify the emails in the received replies. The emails addresses are saved in the database and the user could see them in the Email Addresses page.

Each email has the link to the tweet from which was copied. All emails could be exported in a CSV file.

When a Twitter’s user replies the tweets, the CRM Commenter app creates a page for that user and the user is saved as Guest. In the Guest’s page is possible to see all tweets where the guest has replied, basic information and the assigned categories.

Categories in the CRM Commenter app  are used for three reasons:

Any team’s member actions done in the CRM Commenter app is saved and only the team’s administrator could see all actions in the Activities page.

This app uses the Midrub CMS cache and for reason it loads faster.

The apps in the CRM collection are very big and complex. For this reason, the Quick Guide allows to guide the user in any enabled app. You could see how to enable the Quick Guide for this app here  https://www.midrub.com/articles/how-to-enable-the-quick-guide-in-the-crm-commenter-app

This app supports automatic updates. You could update it with several clicks.