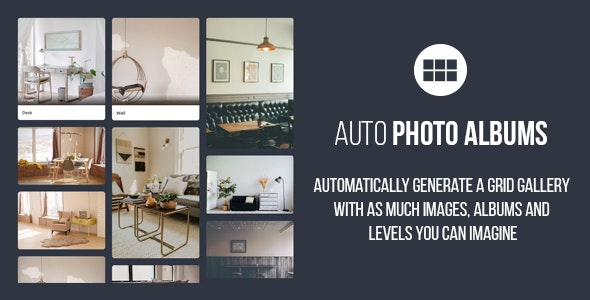 STOP ADDING YOUR IMAGES MANUALLY IN YOUR PAGE!

This is a plugin that scans a folder in your server containing images and folders. The plugin will make a grid responsive gallery taking the folders as albums.

This is an example of a directory that the plugin can read (as you can see you can organize your images in any way you want and the plugin will read your directory automatically):

This plugin not only works very well, the support provided by David, the author, is fast and attentive. He really cares about his customers. I have the HTML and the Wordpress versions and both are solid, do not conflict with the themes I use (The-X, all Kriesi’s themes, 3Clicks and The7, to name a few).
https://codecanyon.net/user/danielsami

Opened the package; followed the installation instructions, uploaded our photos, and it works perfectly. Can’t ask for much more than that!
https://codecanyon.net/user/stockxprt

WOW. I’m VERY impressed with this script!!! I’ve been buying scripts from Envato for last 8 years or so, never I had such an easy installation and perfect result as with this script. Yes it’s a simple script, but sometimes even simpler scripts gave me a lot of headaches. This script is AWESOME!
http://codecanyon.net/user/ahakobyan

Amazing albums with great function with an excellent customer support! Who can ask for more? http://codecanyon.net/user/artist21