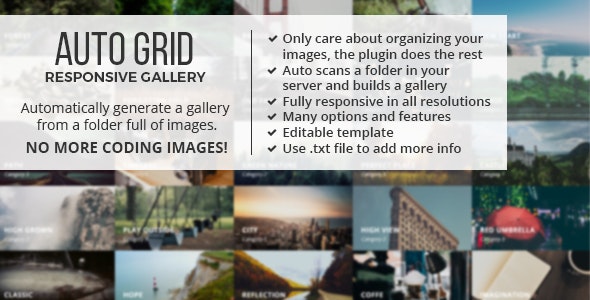 This is a plugin that scans a folder in your server and its subfolders containing images. The subfolders will be the categories that will appear at the top, and the plugin will make a grid responsive gallery with the images.

Just wanted to say thanks to David… this script is great and his support rocks too… always there to help and quick with the answers. Keep up the good work.
http://codecanyon.net/user/chrishalls

i had the first version of this plugin and loved it. the new updates are amazing. great work david
http://codecanyon.net/user/mpjbay

This is exactly what I’ve been looking for, for over a year! Glad I waited and found this. I’m using this for family photos and can now just easily add new ones without managing different resolutions or editing files.
http://codecanyon.net/user/furnient

Amazing job David, you deserve more recognition. Keep up the good work! and for future costumers, don’t forget to rate his work in the download page.
http://codecanyon.net/user/nyttnu