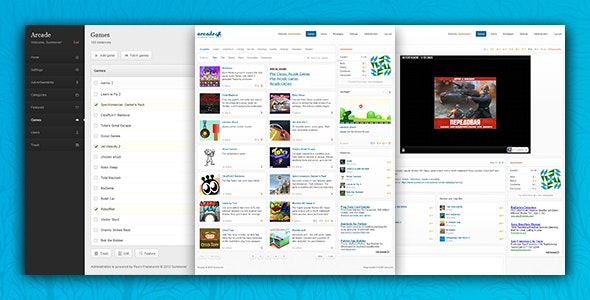 If you want your site to be listed here then send us an e-mail with a link to your website.

You can learn more about Arcade Management system from the documentation. It is also included in your download.

Arcade Management System also supports multiple languages and custom themes. You can read more about that from the documentation linked above. There’s also a custom 404 page, here’s an example.

For now, you can view the administration in the screenshots but there will be a link to an administration demo with some actions disabled in the description once we’re done working on it.

Download the script and overwrite the files you previously had. Note that some changes you make to the code may be overwritten. Follow the documentation when translating or re-designing the site to avoid complications.

You can read about how to enable this feature in the documentation.

If you have translated the script and created additional language folders, you will have to edit line 91 in your app.yml file. Change the “dress-up” key to “dress_up”.

Every user starts out as level 1 upon registration. They can earn experience and levels through various actions:

When a user plays a game with the leaderboard enabled and submits a score, the user gets as many points as the number of other players (s)he beat. For example, if a user ranks third in a game that has 10 score submissions, the user receives 7 points.

To reach level 2, a user has to earn 50 points. As the level increments, so does the amount of points needed to reach the next level by 50. On the users page, you can order users by how many points they’ve collected in a certain time period. Each user can also see how they rank on the sidebar.

Once you finish the database setup, you will be prompted to create a user account. The account you create now is the most privileged user on the site, it has access to the administration and can create other administrators. Once you finish this step, you’ll be on the home page logged in as the owner.

4.41 stars
4.41 average based on 44 ratings. (more information)
© All Rights Reserved Summoner
Contact the Envato Market Help Team
Quick Links Explore popular categories
by
by
by
by
by
by