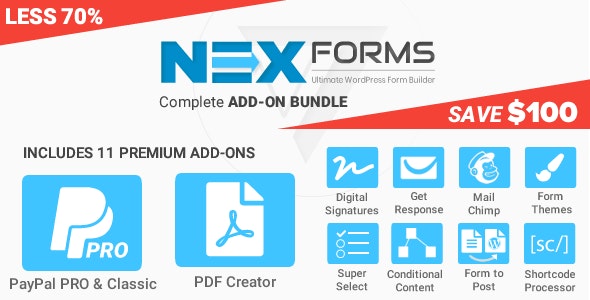 This bundle includes all NEX-Forms add-ons for 70% less.

Export to PDF add-on for NEX-Forms will enable you to export form entries to PDF with a click of a button! Create your own custom PDF Designs and use dynamic form data to populate the PDF’s

Digital Signatures add-on for NEX-Forms will enable you to digital signature fields to your forms. Signature will be captured and displayed in your emails and saved to your submitted form data be viewed in your backend.

Use 1500+ Icons to create your own custom Radio Buttons, Check-boxes, Drop-down selects and Spinner selects. Absolutely Full Customization…use any on/off colors and any on/off icons for each option individually. Includes 70+ animations for selections made and the ability to attache the selection to other fields.

You will never want to use any other selection field again!

This useful add-on will allow you to select between 25 preset themes (color schemes) to instantly change the overall look of your form.

This will make it very easy to quickly and effectively fit a form’s design to your theme’s overall look and feel.

This add-on gives you the ability to change content in its place using conditional logic blocks in emails and PDF’s. You can also use this to change email recipients or any email attribute based on what users select or input into your forms

This add-on enables automatic updates of your MailChimp lists with new subscribers from forms built with NEX-Forms.

This add-on enables automatic updates of your GetResponse lists with new subscribers from forms built with NEX-Forms.